La Barceloneta is one of the neighborhoods that form, together with Gothic, Born and Raval, the historical center (Ciutat Vella) of Barcelona. It has a triangular shape and an area of ​​71 hectares, going from the hotel W beach to the Olympic Port, and up to the Ciutadella Parc.

The first project of construction of the district was led by General Marquis Castel Rodrigo, who in 1718 designed was to be called, at first, the Barrio de la Playa (district of the beach). This area was destinated to the inhabitants of La Ribera neighborhood,  who had been evicted from the neighborhood of the Born-Ribera  when Barcelona was taken during the Spanish Succession War, between 1713 and 1714.

The original architecture of Barceloneta has been described as an excellent example of Peninsular Baroque Urbanism, with single-floor low houses.

Until the mid-nineteenth century, the activities of the inhabitants of the Barceloneta were primarily related to the sea: fishing, port activities and construction of sailboats. It was from the ban, in 1846, to build other steam engines inside the walls of the old town (current Gothic Quarter) when a certain industrialization of the district of Barceloneta, especially industry gas production began.

From 1920’s and forward, the industrial sector of the district began to stumble under the increasing competition and lack of capital, and new sectors developed in the neighborhood , such as carpentry, furniture making, small chemical factories, jewelers, watchmakers, and so on. 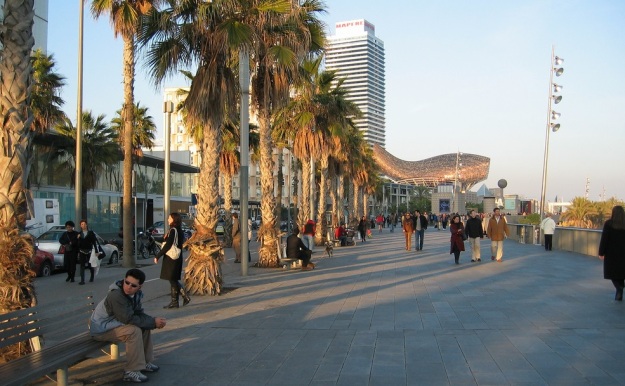 La Barceloneta is one of the most loved districts of Barcelona, both by the locals and tourists. Because of the success and increasing popularity of the neighborhood, some locals prefer to go to other beaches of Barcelona or even outside or town, such as Sitjes, Roses, or Ocata.

And there are good reasons to this success. Barceloneta offers countless activities and places to go. You can walk by the beach, enjoy a mojito at a chiringuito, rent a surf or paddle surf board, have dinner at an amazing paella or fish restaurant, and at night, get ready for Barcelona’s cosmopolitan nightlife.

The rest of the year, Barceloneta is still a very interesting area to visit. During spring and autumn, although the sea is too cold for swimming, the climate is warm enough to enjoy a walk by the sea and, in a lot less crowded beach.

A very original and scenic way to get to Barceloneta district is using the Montjuic Cable Car, which takes less than five minutes from the Mountain to the beaches of Barceloneta, including spectacular views of Barcelona.

This site uses Akismet to reduce spam. Learn how your comment data is processed.