Celebrate the New Year’s Eve in full fashion in Barcelona, where the streets will be filled with people celebrating the New Year.

During this time of the year you could also enjoy the Christmas Shopping time in Barcelona that it is a unique, unforgettable experience. There are so many things to do and you can enjoy Christmas in lots of different ways in keeping with your own tastes and interests.

During the Christmas time, and especially in the 31st of December, there will be great activity in the city! Especially the 31st of December, will find a lot of activities to do during the afternoon and night, and it’s up to you where to celebrate it. From late in the evening until early in the morning you will have plenty of action and cava spontaneous shows around town!

In Catalonia and Spain, New Year’s Eve tends to be a time for family dinners, with most people emerging to party after midnight, but this year you could celebrate the entrance of the New Year, in a ceremony in the Maria Cristina Avenue, between Magic Fountains and Plaza España.

This ceremony will be placed in one of the most emblematic places of Barcelona with a ceremony with fireworks all this ceremony will be reported in Europe Press Barcelona Tourism, which is the organizer. The celebration will last approximately 45 minutes and will include the ”Man of the Millennium”, the figure of the iron frame of La Fura dels Braus, this figure was used to celebrate the coming of 2000.

As well, there is a secondary stage, and the Agbar Tower will live up to the occasion with a light show during the celebration.

Like restaurants, many bars and clubs have special conditions for New Years Eve. A few of them offer the party since before midnight, so you can have the countdown already partying, and at others you have the party only after midnight. Here is the list of some of the best and wellknown places of Barcelona:

Traditionally, we take a glass of cava (similar to champagne) and 12 grapes representing 12 wishes. You must eat one for each chime of the clock, at midnight. It’s harder than you’d think, and tinned, pre-peeled versions are available. Be careful not to strangle! 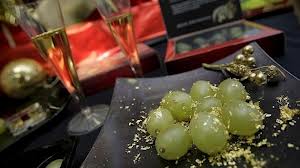 Also it’s a tradition to wear red underwear for good luck in the coming year!

During the day, look out for L’Home dels Nassos, the man who has as many noses as days the year has left (it being the last day, the sly old fox has only one) who parades and throws sweets to the children.

We really hope we have given you some clues to celebrate the New Years Eve 2014 inBarcelona!

In our Facebook and  Twitter sites we will keep you updated with the latest news and timetables for this special and unique event!

This site uses Akismet to reduce spam. Learn how your comment data is processed.